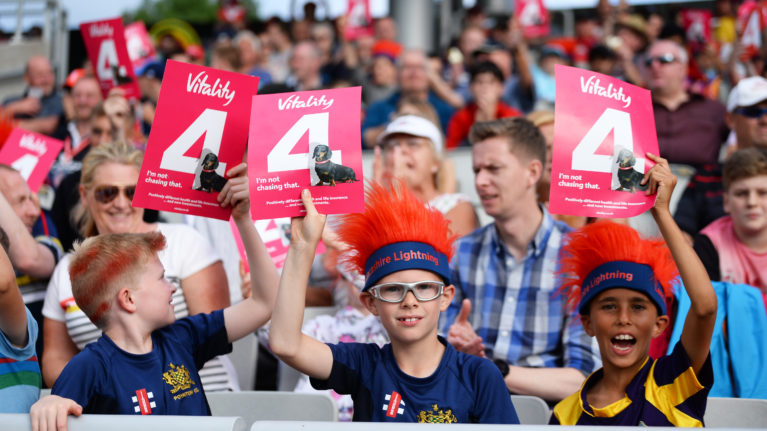 Thank you to everyone of you who completed the survey. Cricket Fans have had their say and you’ve let us know what you think and the importance of county cricket, concern over The Hundred, the desire for more cricket free to air and a positive outlook in terms of engagement with the game all came across clearly.

With responses from over 3,000 of you of all ages, the independent survey offered you the chance to have your say on what’s happening within the game and this is what you said:

The Hundred continues to be a concern for existing fans with 63% expressing negative feelings towards the new format, only 20% of fans feel positive and are looking forward to it and 26% remain openminded.

The discontentment around The Hundred includes the impact on the existing county structure (50%). It should also be noted that the younger audience are keener on the new competition with 37% of 16–24-year-olds feeling positive, 36% of the same age group feeling negative and 33% undecided.

With the latest survey results revealing such negativity amongst cricket fans, the Cricket Supporters’ Association is calling for increased transparency and openness about The Hundred and looking for an understanding as to what success looks like and how the new format will be evaluated by the ECB.

As commented by Becky Fairlie-Clarke, CEO of the Cricket Supporters’ Association, “It has been clear since launch that The Hundred isn’t popular amongst many cricket fans. Despite these concerns, the competition is going ahead and so we as an organisation would like to know what success for The Hundred is going to be. The rationale behind The Hundred is all about growing the game and so all we want to know is what this growth looks like, what are the links to driving participation and engagement with the existing county teams and with cricket as a whole and how will these be measured?”

A desire for transparency and for the involvement of us fans in decision making is apparent across the board, as 92% of fans would like to be given the opportunity to view the research used by the governing bodies to make decisions about the game.

Only 22% of fans think that the ECB considers existing fans when making decisions and 81% of fans would like to be given the opportunity to work with the ECB in terms of sharing their experiences and knowledge for the survival of the game.

Positively, the survey also revealed that of those of you that play, 41% intend to play more cricket this season compared to 2019 (we chose to ask about 2019 due to the impact of the pandemic on the 2020 season), 43% of cricket fans intend to watch more cricket and 33% of fans are more engaged with cricket than in 2019.

In terms of how they engage, Channel 4 was the most popular broadcaster at 31% although YouTube and live streaming are also very popular. Interestingly, 17% took out a paid for TV subscription to watch cricket over the last 12 months and 68% of them will be maintaining this subscription moving forward.

The importance of county cricket and its relationship to Test cricket in the eyes of fans also came strongly across as 98% think the County Championship is the breeding ground for future England test players whilst 94% are worried the County Championship is not being prioritised enough so that it can be an effective breeding ground for future England players.

Scheduling is a continual hot topic, and it was mixed in terms of responses on the overall fixture scheduling for the 2021 domestic professional season with 40% happy and 45% unhappy. However, in terms of priorities for 2022 and the summer months, it is clear that Test Matches (23%), County Championship (22%), T20Blast and ODI’s (both on 13%) are the priorities.

Fairlie-Clarke of the CSA continued, “Fans realise how difficult the past year has been for the ECB and the game and acknowledge the amount of work behind the scenes. We are simply asking for fans to have a voice within cricket, to be part of the process and be asked when decisions about the sport are being made. As football is showing, fans aren’t the enemy and our experience, knowledge and insight should be utilised for the good of cricket.”

Next steps for the CSA:

The 15-minute online survey was created by the Cricket Supporters’ Association. The survey was open to all cricket fans to complete and designed to understand the current opinion of cricket fans (of all ages) across England and Wales. The survey was accessible via www.cricketsupporters.com and was shared via the CSA’s official social media channels, through the CSA newsletter database, through various media and stakeholder social media channels and through media relations.

The survey had over 3,000 responses, providing insight into both fans’ behaviour and engagement with cricket, as well as attitudes towards the current ‘hot topics’ surrounding the game and how it moves forward. All those who took part in the survey were 16 years old or older.